THE VILLAGER | BY TEQUILA MINSKY

To mix metaphors — and why not, since everything about this plan is “unprecedented”? — Little Italy and Soho activists say they are being railroaded by the bus part of the L shutdown mitigation scenario. 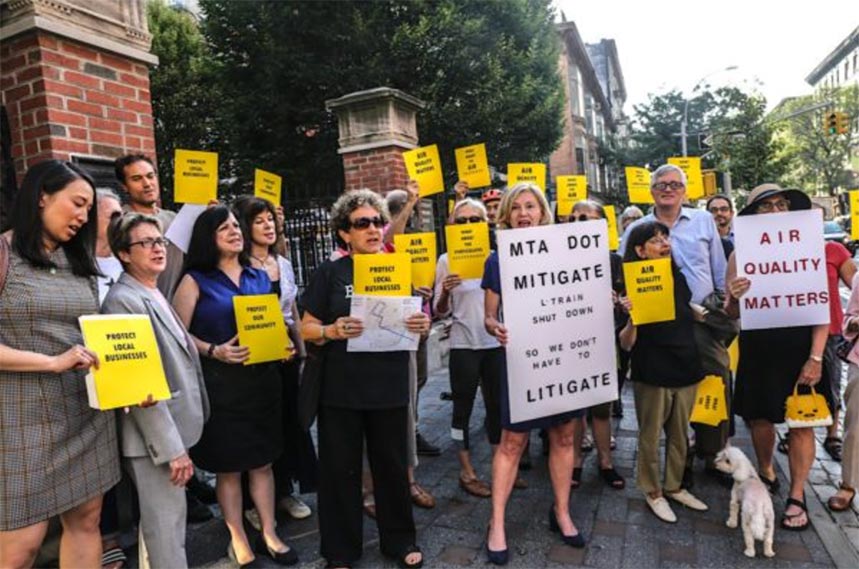 “They haven’t done an impact study on the Lafayette / Kenmare area,” charged Georgette Fleischer, president of Friends of Petrosino Square.

That’s one of the rallying points of the ad hoc Kenmare-Little Italy Loop Coalition, whose members met under a blazing sun Wednesday morning to highlight their concerns about the bus route, a transportation replacement to Manhattan for the L train, which will significantly impact their neighborhood.

The city hopes to shut down the L train tunnel between Bedford Ave. in Brooklyn and Eighth Ave. in Manhattan for 15 months starting in April 2019, to allow for repairs to the tubes under the East River, which were damaged by salt water flooding during Superstorm Sandy six years ago.

“All the attention has gone to 14th St.,” Fleischer said. “We just learned in January that they would be using our area for these diesel buses coming through with all those riders who would have been using the L train.”

Under the city’s plan, 14th St. would be turned into a car-free “busway” for most of the day, a measure that Village and Chelsea residents have been fighting, fearing it would flood their side streets with all the traffic diverted from the major crosstown thoroughfare.

At Wednesday’s press conference on the southern end of Petrosino Square on Kenmare St., Fleischer noted that the intersection at Lafayette St., Cleveland Place and Kenmare St. was found to be one of the 12 most dangerous intersections in all of New York.

“How wise is it for this area to be the hub for all this transportation to be coming through?” she asked.

The Metropolitan Transportation Authority and city Department of Transportation are teaming up on the mitigation plan, also known as the “Alternative Service Plan,” which would also increase ferry service across the East River and add new bike lanes on 12th and 13th Sts. Under the scheme, a constant convoy of extra buses would come shuttling across the Williamsburg Bridge to Delancey St., which becomes Kenmare St., and then make a right on Cleveland Place to head up to Houston St. 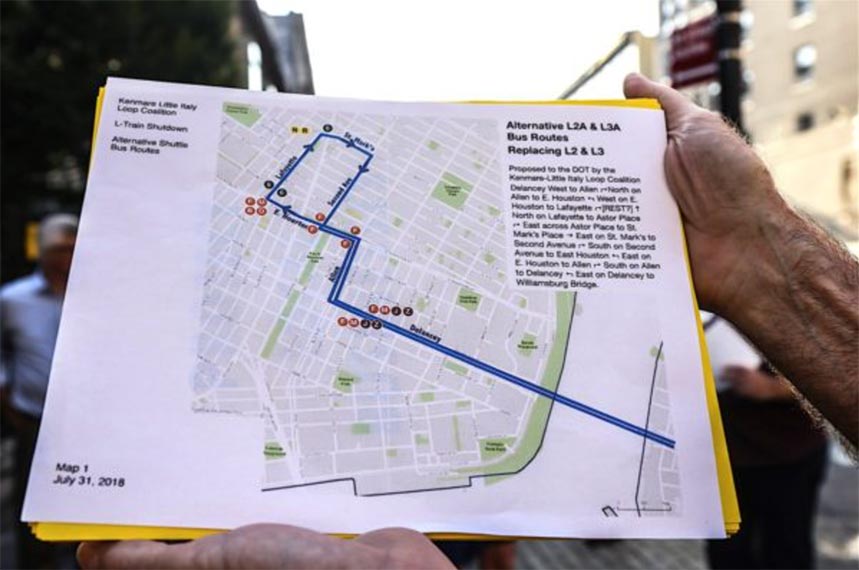 The communityʼs alternative bus plan does not have any routes that go down Kenmare St. to Cleveland Place, but instead has them all turn up Allen St.

The coalition is pushing for a restoration of a two-way toll on the Verrazano Bridge since the current one-way toll has been proven to increase congestion along Kenmare and the surrounding streets. In addition, they charge, all the trucks have no business in Manhattan but are merely looking for cheap passage — via the Holland Tunnel — to New Jersey. Fleischer pointed out how adding 48 diesel buses per hour on this narrow street, under the city’s L shutdown mitigation plan, is untenable, since the street is already bottlenecked during rush hour.

Since all those diesel buses would be emitting toxic particulate matter, contributing, especially, to asthma for area children, the coalition is calling for using electric buses instead of diesel on this route.

The city’s plan would see four bus routes added in Brooklyn, which would cross the bridge and then have two endpoints in Manhattan, at Houston St. and 14th St. At the peak, 80 buses per hour would be coming over the bridge

into the neighborhood: Fifty of these would take the Kenmare St. / Cleveland Place route, while 30 would go up Allen St.

Michele Campo, of the Bowery Alliance of Neighbors, or BAN, repeated that at all the public meetings regarding the L train, this area of Soho / Little Italy area has gotten scant attention.

On behalf of the coalition, Campo has offered an alternative bus route, using the wider Allen St. for all the routes to go uptown to Houston St., hitting every subway entrance in the city’s plans — except for the Spring St. 6 train stop — and connecting to the 6 train at Broadway / Lafayette St., a much larger station than Spring St., which can handle more people, with more subway lines and an elevator.

“The streets are wider, less residents — it works,” Campo said of the community’s alternative bus plan.

Holding a sign that read, “Protect our Businesses,” Eunice Lee, of the Downtown Independent Business Alliance, spoke of the merchants’ struggle simply to pay their rent.

Robin Goldberg, a former member of Community Board 2, spoke about the planned bus holding area on Lafayette St. between Prince and Houston Sts. that will decrease the number of lanes for traffic on Lafayette Sts. It was also emphasized how the firehouses on Lafayette and Broome Sts. need access to the streets so that they can quickly respond to emergencies.

Assemblymember Yuh-Line Niou said the city’s process has lacked transparency and that residents near these routes have had no voice in the planning, while the community’s option makes sense.

“This alternative plan is logical and seamless,” she said. Assemblymember

All the politicians stressed that the city must share its traffic data for the Kenmare St. area, so that an informed decision can be made.

As longtime Soho activist Pete Davies put it, “We all just want them to share the information. They’ve provided all kinds of traffic information for 14th St. We don’t have anything done on traffic numbers for Kenmare.”