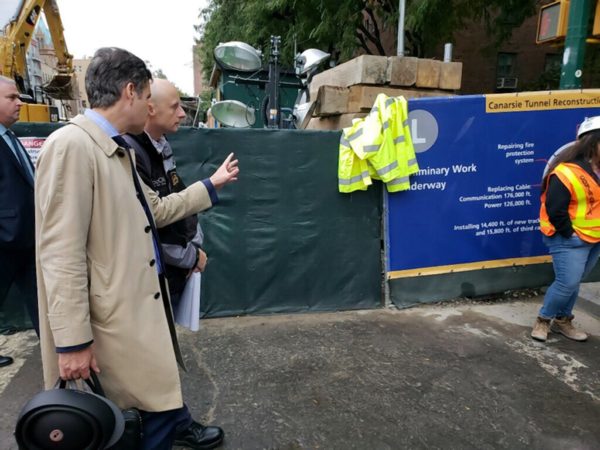 From left, State Senator Brad Hoylman recently joined Andy Byford, the Transit
Authority president, on a tour of the construction site at the L train’s First Ave. station.
The station is getting a new entrance at Avenue A and will also be the main staging
area for the L train tunnel repairs. Courtesy Brad Hoylman’s Office

BY SYDNEY PEREIRA | The city announced last week that it will install air-quality monitors along new bus routes during the L train shutdown.

During the shutdown — slated to begin April 27, 2019 — the city plans to add additional subway, ferry and bus service, plus bike lanes. To transport 17 percent of displaced L train riders, the city intends to create a dedicated “busway” along 14th St., plus four new bus loops in Brooklyn and Manhattan that would send 80 buses per hour over the Williamsburg Bridge during peak hours.

After months of protest by local residents, the city committed to monitoring particulate matter, called PM 2.5, from diesel bus emissions. Those monitors are in addition to existing ones at construction sites for the L train along E. 14th St. in the East Village monitoring PM 10, where work is ongoing.

“Considering where we’ve come from, I view this as real progress and a real win for community groups that have been working on this,” said Pete Davies [member of DID], a Soho activist and member of the Kenmare/Little Italy Loop Coalition.

Early last month, more than 40 Downtown community groups and district leaders from the East Side to the West Side signed onto a letter demanding that local politicians address air-quality concerns at E. 14th St. and Avenues A and B, as well as along the new interborough bus routes. The groups slammed an environmental assessment that was conducted due to an ongoing lawsuit against the L shutdown. The study found no significant difference in impact on air quality between “no action” — meaning, doing nothing during the L shutdown — and the “alternative service” plan.