What DID did: The Downtown Independent Democrats recently voted to endorse Cynthia Nixon over Andrew Cuomo in the September Democratic governor primary election. We heard Nixon won like two-thirds of the vote, but D.I.D. is not confirming that.

“For various reasons, we have a policy of not revealing those numbers precisely,” Sean Sweeney, a club leader, told us. “One reason is to avoid embarrassing someone who may have been clobbered. But I shall tell you that Nixon won it substantially.” The club’s vote for New York State attorney general was tight, though, with Public Advocate Letitia James besting Zephyr Teachout, who ran against Cuomo in 2014. “It was much closer between Zephyr and Tish, but Tish prevailed,” Sweeney related. “It was also a veritable love fest between them — and the third candidate, as well. They couldn’t say enough good things about their opponents.” The third candidate was Leecia Eve, a Harvard-educated former policy adviser to Hillary Clinton when she was a senator whose father was a New York assemblymember. D.I.D. also backed City Councilmember Jumaane Williams over the incumbent, Kathy Hochul, in the primary race for lieutenant governor.

Correction: We apologize for the item in last week’s Scoopy’s Notebook that said there would be a mental-health workshop at C-Squat on June 29 to help address recent suicides in the community. It turns out that is a private memorial for friends and family — not public. To be clear: C-Squat is not advertising it as a public event, and no one should turn up who is not invited. We regret the error and sincerely apologize. There is, however, a related event happening this weekend. A community mental-health workshop dubbed “A Celebration of Dangerous Gifts” will be held Sat., June 16, at 242 E. Second St., from noon to 8 p.m. Sponsored by the Institute for the Development of

Human Arts, the event aims to use art, music, spoken word and more to recast “madness and creativity” in an understanding and positive light. The I.D.H.A. workshop is, in fact, being hosted by some friends of C-Squat, and some members of the former Avenue C squatter building will also be volunteering. Organizer Sascha DuBrul Facebook-messaged Villager journo Sarah Ferguson with more details about the event. “The reason why we’re throwing an event celebrating ‘dangerous gifts’ is that we’re determined to redefine what we mean when we talk about ‘mental illness and wellness,'” he said. “Our society is obsessed with the biological model that looks for ‘diseases’ and ‘disorders’ and treats them with pills. We recognize that so many of the most brilliant, the most visionary people are labeled as sick, when it’s more like we’re sensitive, and we need to take extra special care of ourselves. It’s not that we’re saying there’s no such thing as ‘mental illness.’ We’re just starting from the realistic place that the society we live in is way sicker than any one of us individually could even be, and so we’re not interested in integrating into society. We’re interested in evolving it. We will be sharing and celebrating art and gathering to have conversations about how to take better care of each other, opening up space for conversations and support.” For more information, see the event’s Facebook page. 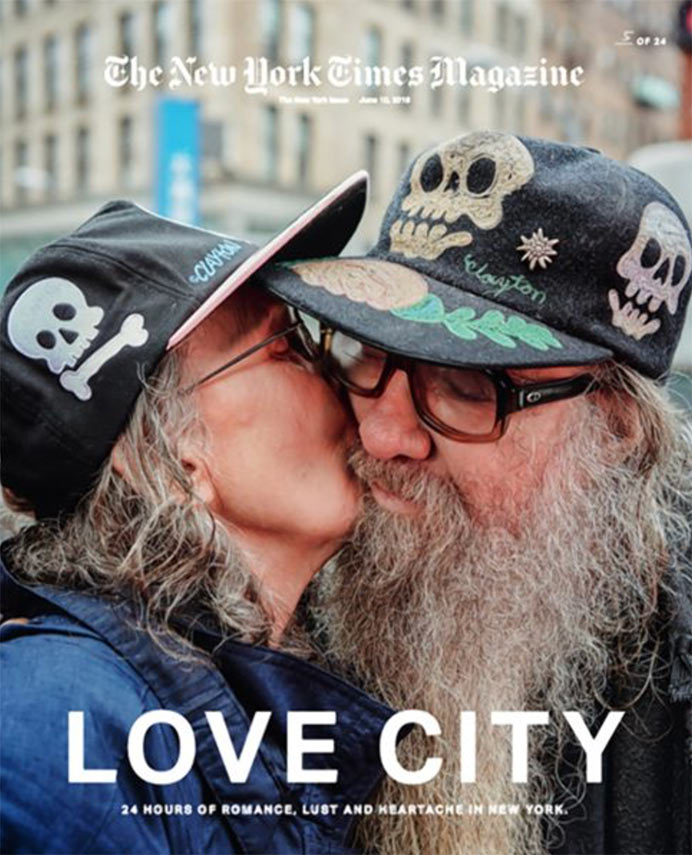 Elsa Rensaa and Clayton Patterson made the cut as one of 24 couples on alternate covers for the New York Times Magazine last weekend. Photo by Ryan McGinley

Got it covered: Congratulations to Clayton Patterson and Elsa Rensaa, who were featured on one of the multiple alternate covers of the New York Times Magazine last weekend for its feature “24 Kisses Around New York City in 24 Hours.” The portraits were shot by photographer Ryan McGinley. Patterson, who has documented the Lower East Side since the 1980s, was very honored, and took a moment to reflect on his relationship with Rensaa. “The moments are lasting — lasting for 46 years, that is,” he said. “Who could believe it? I thought there was too much salt and vinegar in my veins to get something romantic like this.” It wasn’t quite clear what the Times’s distribution strategy was, however, or if was just some sort of random scrambling of the magazines. The copy of the Sunday Times that Patterson bought in his neck of the woods had a different couple on the cover.

Celeb food phonies: Among the many outpourings of grief and reactions to Anthony Bourdain’s death, John Bredin, of the Village Independents, posted the following on Facebook, accusing our profits-crazed economy and its vapid foodie culture of contributing to the beloved TV host’s demise: “Anthony Bourdain was a victim of capitalism...a system that kills in many ways,” Bredin posted, “directly, via war and poverty, or by slow boredom over time. Dear Anthony, who had a rebel spirit — I saw him call out political bulls — and oppression more than once on his show — was caught up in the phony, empty world of food celebrity. It is my belief that the sheer meaninglessness of capitalism leads to psychological depression. Just yesterday I was at a cafe in super-trendy chi chi Greenwich Village — once home to artists, rebels and radical thinkers, now home to bankers and other boring types. Sitting next to me at one of those big community tables, a couple in the ‘food celeb culture’ preened on and on (ad nauseam), and the sheer emptiness of their discourse was so evident to me. I almost turned to them and said: ‘Aren’t there more important things worthy of your attention, like poverty and wealth inequality and the threat of nuclear destruction?’ But I didn’t. I held back in silence. I was polite. Then I awoke to the sad news of Anthony Bourdain’s suicide. Lucky for me I could walk away from those two vapid, pretentious a–holes in the cafe. Poor Anthony had to be around them all the time. Until we create a new, less-alienating society based on the principles of love and peace and not capitalistic greed (to abolish capitalism like we abolished slavery), this monstrous system will claim even more victims. Rest in Peace, my dear brother Anthony.”