True to its roots, Grassroots Tavern will close, not raise prices

BY REBECCA FIORE | Three-dollar pints of beer, free popcorn, dartboards and disgusting bathrooms are some of the classic characteristics of a dive bar. But for patrons of the Grassroots Tavern, it was much more than just a basement bar, it was a home away from home. The East Village watering hole, which is closing on New Year’s Eve, had a strong 42-year run.

Jim Stratton, who is now nearly 80, opened the bar in 1975 based on the idea that the Grassroots Tavern, at 20 St. Marks’s Place, between Second and Third Aves., could be anyone’s living room.

“You live in a neighborhood where all the apartments are small, and if you have a couple of friends over, you are overflowing,” he said. “But if you can go to a neighborhood bar that’s not much more expensive then buying a six- pack, you can get a conversation and a neighborhood of people.” 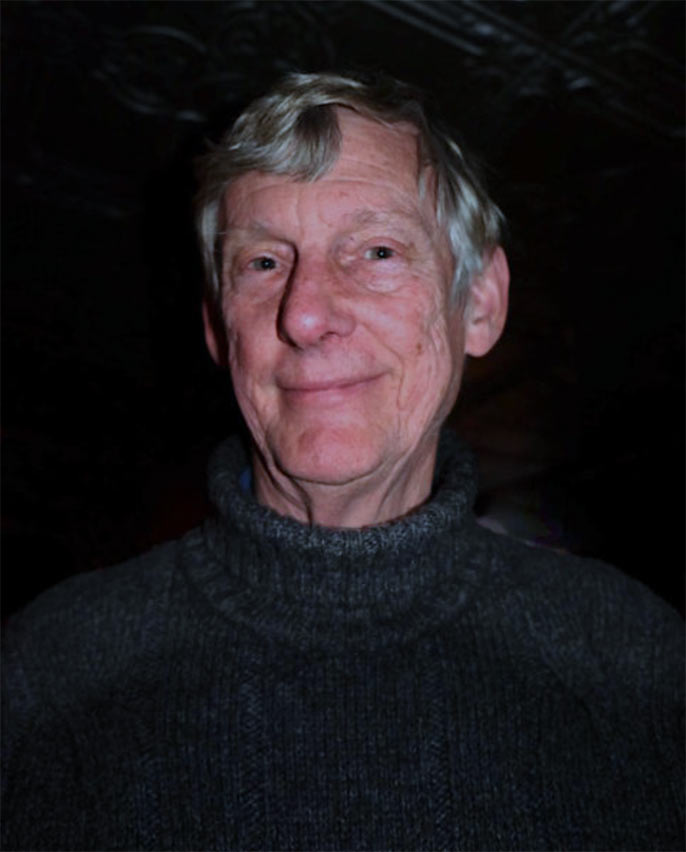 He recalled that, back in the day, the area used to be a lot more dangerous and grungy. Stratton thought that if he opened a bar, he could build a safe space for people.

“I thought that the bar would be the kind of thing that could actually add something to a neighborhood that was a bit sketchy,” he said, “by providing the ability for someone to go out and feel like there’s protection at midnight, or a place you can go in if you are feeling downtrodden.” 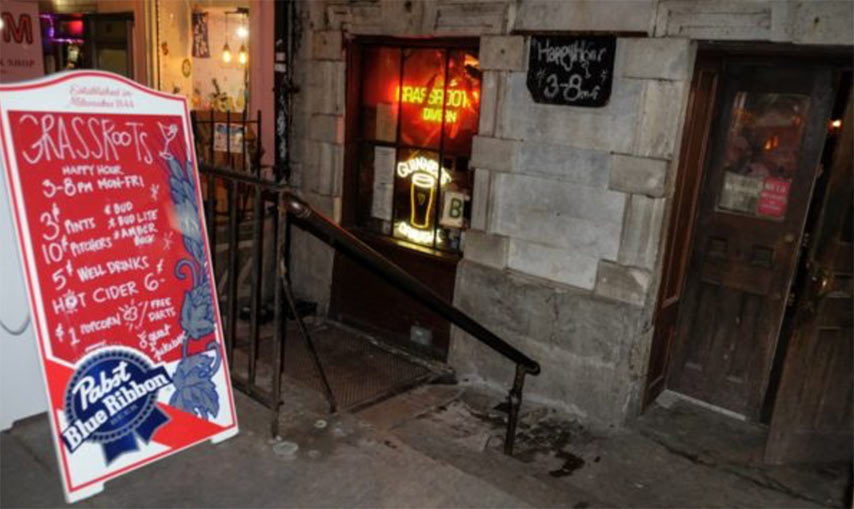 It isnʼt exactly going underground, but you go down to enter the Grassroots Tavern. Photo by Tequila Minsky

From the bar’s early years, he recalled a woman accidentally getting locked out of her Avenue C apartment. She walked over to Grassroots in her bathrobe, had a drink and used the phone to call her husband. Another time, a group of 20 people, speaking a language Stratton had never heard before, came in and drank, laughed and threw darts all night.

“They were from Turkey,” he said. “How they found out about the place no one knew, but they found it and took it for themselves for the evening.”

The bar has been a place for first dates, a meeting house for political causes and a SantaCon-free zone. Stratton said all types were welcome, from bikers to poets to chefs, even the occasional celebrity.

Stratton originally moved to Soho in the 1960s, then to Tribeca in the ’80s, before relocating to Brooklyn five years ago. He is closing the St. Mark’s bar due to rent hikes, a ubiquitous problem many local businesses are facing across the city. He stressed, though, that he was not being kicked out of the space, just that he does not want to change his business approach.

“When you are selling a pint of beer for $3, which is what we are doing half the day, and $4 the rest of the day, we just can’t [pay the rent],” he said. “We would have to completely revamp our operation and none of us are really happy about that.” 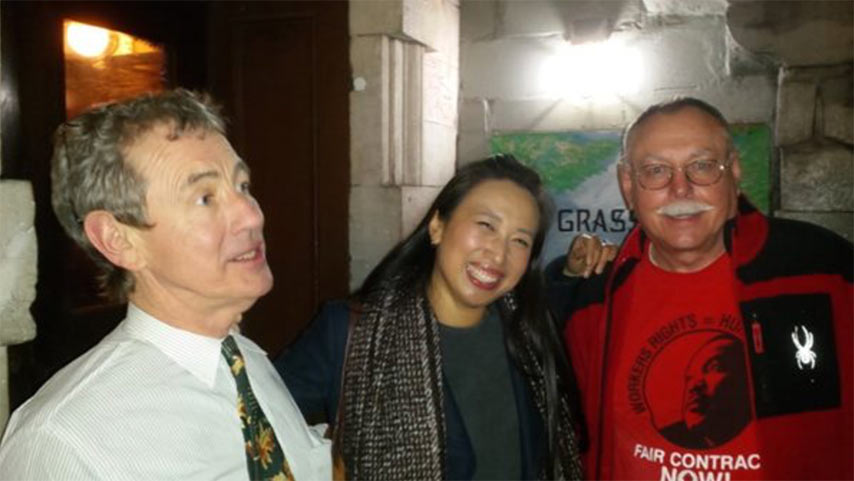 Sean Sweeney, director of the Soho Alliance and treasurer of the Downtown Independent Democrats, said the bar’s name comes from Stratton’s own community activism. Stratton founded D.I.D. in 1972, and the club continued to host its Christmas party at the tavern.

“Since he’s a grassroots activist — in politics and community organizing — it is very appropriate and a little ironic that it’s so aptly named,” Sweeney reflected.

Sherry Wolf, a public speaker, writer and activist, said from the time she moved to the East Village in 1988, “Grassroots has occupied a special place in my circle of International Socialist Organization comrades.”

She remembers the tavern as a space where her friends could talk political theory and strategy. It was a place free of harassment and yuppies, she said.

“Grassroots Tavern was often the site where we could walk in alone and find comrades looking for rambling political arguments, fierce polemics or just plain camaraderie,” she said. 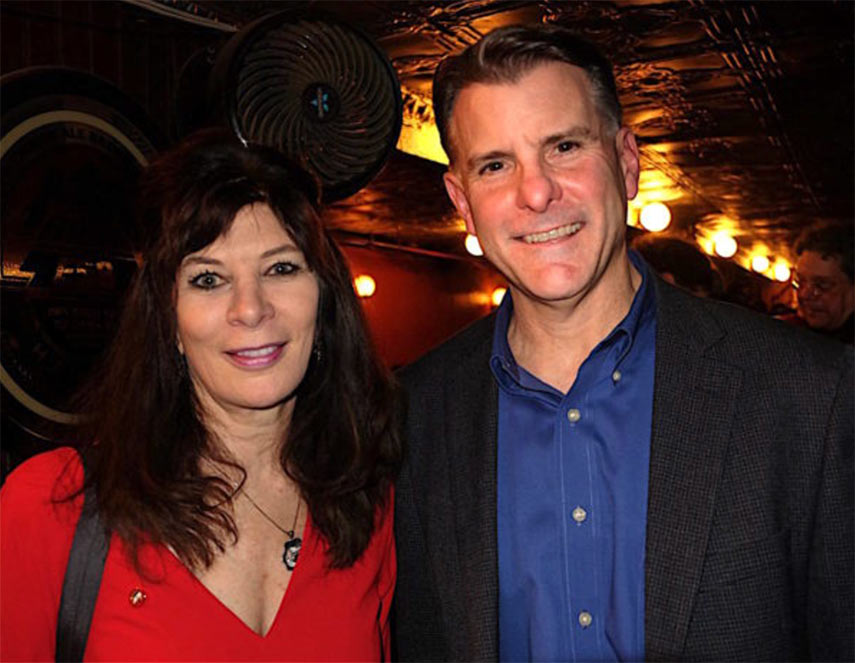 Sweeney said that while many local community boards aren’t fans of bars, between the noise levels and the flow of drunken customers, Grassroots has never had issues.

“When Jim’s license came up for renewal a few years ago, people came out to support his liquor license,” he said. “It’s a community-friendly place. You could almost call it a mom-and-pop.”

Harry Pincus, an illustrator and longtime Soho resident, said he would miss this piece of “my old New York.”

“I still have a couple of scratched old mugs from the Grassroots, going back more than 40 years,” he said. “I will cherish them.”

Stratton said he met the bar’s new operator, Richard Precious, who has already applied for a liquor license from Community Board 3. Sweeney said word is the new place will be an “Americanized Irish” pub.

“I’m hoping the place will retain a lot of its sense of neighborhood and community that it’s always had,” Stratton said.