THE VILLAGER | BY LINCOLN ANDERSON

Coming together in a united front, two nonprofit groups associated with the Elizabeth St. Garden on Tuesday agreed to “coordinate their legal efforts” to stop an affordable housing project on the garden. 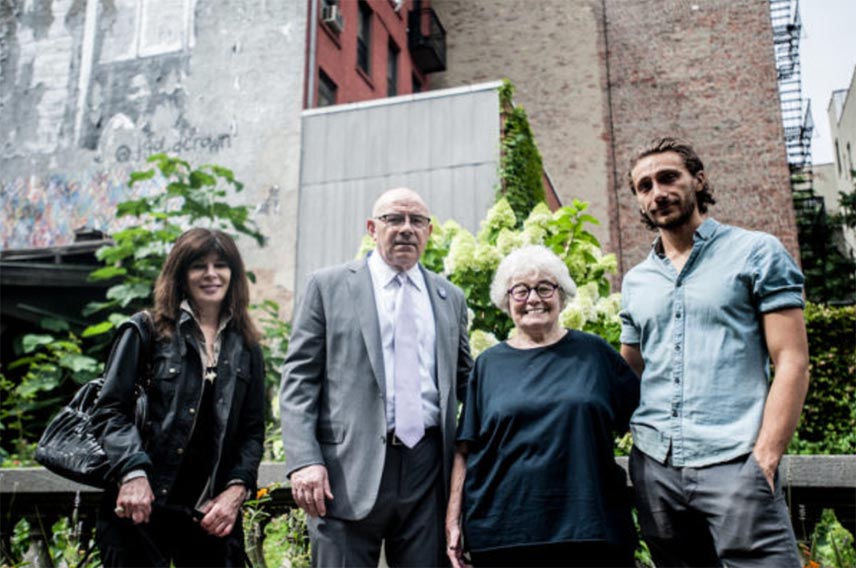 In the Elizabeth St. Garden last summer, mayoral candidate Sal Albanese, second from left, was joined by, from left, Jeanne Wilcke, then-president of the Downtown Independent Democrats club, and Renee Green and Joseph Reiver, board members of Elizabeth St. Garden. Albanese said, if elected, he would save the garden. Photo by Rebecca White

The green oasis in the heart of Little Italy, between Elizabeth and Mott Sts. and Prince and Spring Sts., currently covers 20,000 square feet. Dubbed Haven Green, the housing project, announced at the end of last year, would include 121 apartments for seniors, plus preserve some of the garden, in the form of 7,600 square feet of open space.

Shortly after the city announced the winning developer for the planned housing scheme, E.S.G. retained Norman Siegel, the well-known civil-rights attorney, to represent them in a potential lawsuit. However, as of spring 2017, F.E.S.G. was not committing to joining the other group’s litigation — though also was not ruling out the possibility of suing, either. E.S.G. subsequently brought in Siegel to replace their previous attorney; at that time, Siegel told The Villager that part of his strategy was to reach out to F.E.S.G. since there is greater strength in unity. 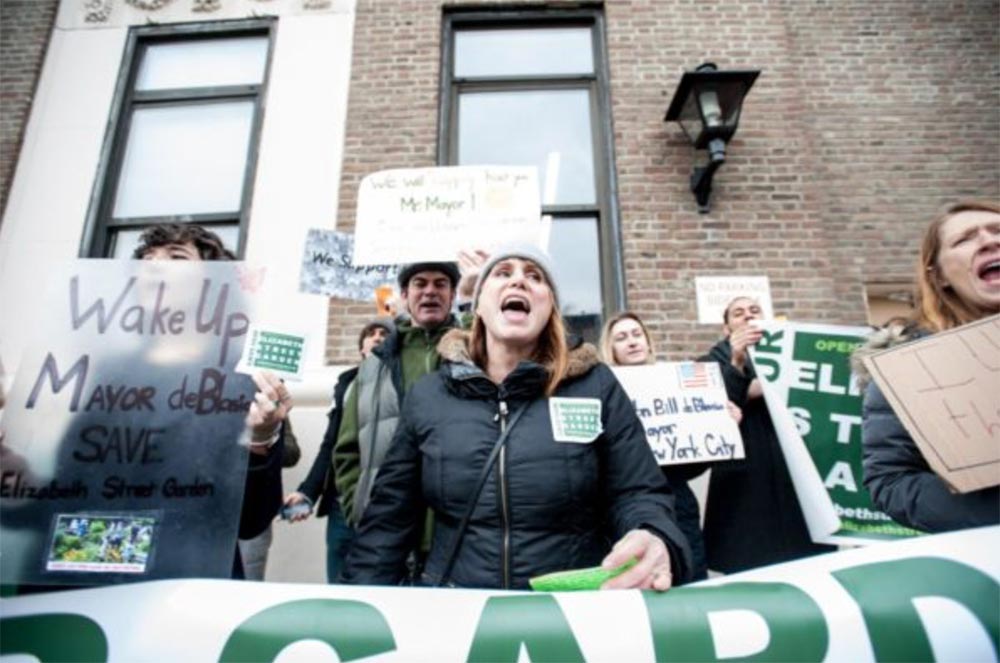 Elizabeth St. Garden advocates — including Jeannine Kiely, center — rallied outside the Prospect Park YMCA one morning in February 2017, buttonholing Mayor de Blasio and urging him to save — and visit — the garden when he went in for his usual workout. De Blasio has promised to visit the garden, but has yet to do so. Photo by Rebecca White

F.E.S.G. was the group that originally started managing and programming the garden several years ago. However, Reiver — whose father, Allan Reiver, created the garden on the previously trash-strewn lot more than two decades ago — started E.S.G. with the express intention of suing to stop the housing from being built there. Making it unique by New York City standards, Allan Reiver filled the garden with large granite and marble monuments and architectural pieces.

F.E.S.G. has a top attorney, too — Michael Gruen, whom it has retained since early 2017. That might well give the city pause: Gruen represented the plaintiffs from The City Club of New York in a lawsuit that last year brought Barry Diller’s dazzling Pier55 “entertainment project” grinding to a halt. Frustrated at the prospect of further legal challenges from the City Club, Diller, at one point, walked away from the project and it literally was dead in the water. But Governor Andrew Cuomo interceded and now Pier55 is back on track, and construction on the pier is underway once again.

Reiver, meanwhile, said that, despite the two groups’ agreement to coordinate on legal strategies, E.S.G. will continue as the garden’s operator and manager.

“Everyone recognized that we share the same goal of saving the garden,” he told The Villager. “We’re setting aside our differences. It’s been progressing to this point.

“We definitely will be suing,” he assured. “We definitely intend to. Right now, we don’t have an exact date [when to file suit]. We’re watching the city closely.” 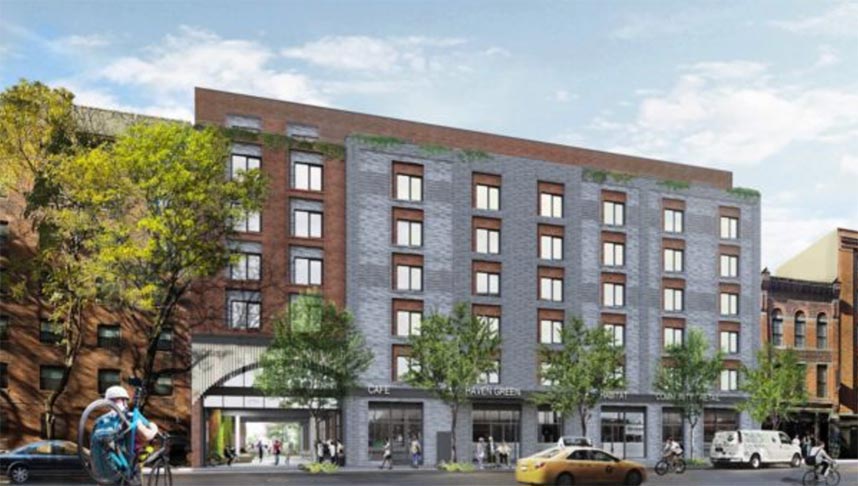 A rendering of the Haven Green project — viewed on Elizabeth St. — that the de Blasio administration and Councilmember Margaret Chin want built at the garden. Some space on Mott St. behind the building would be open, preserving a bit of the feel of the current 20,000-square-foot garden.

For her part, Kiely said, “We have an an aggressive strategy to block the demolition of the garden, beginning with a powerful legal case against the city argued by Michael Gruen, a top land-use attorney with a proven track record of winning.”

The housing project on the Little Italy garden was secretively slipped in by the Bloomberg administration and City Councilmember Margaret Chin as an “add-on” to the Seward Park Urban Renewal Area, or SPURA, project — now known as Essex Crossing — on the Lower East Side, after the goal of having 100 percent of the housing units there be affordable could not be attained. In a highly unusual move, Community Board 2 was completely cut out of the process, never even notified before the city-owned garden site was designated for housing.

Mayor Bill de Blasio — whose laudable mantra, of course, is affordable housing — has championed the Haven Green project, adding that the decision to include the housing while keeping some open space there was nothing

Reiver said, as of right now, his group is focusing on the E.S.G. fundraiser, to be held Thurs., June 21, in the garden, plus the upcoming presentation by the Haven Green development team on their plan at C.B. 2, on Mon., June 25. In addition, Kiely said her F.E.S.G. group has launched a legal defense fund and “quietly fundraised $50,000 toward our $100,000 goal,” and they will obviously also be attending the June 25 hearing.

In related news, at a recent Village forum for statewide political candidates, Cynthia Nixon, who is running versus Cuomo in the September Democratic primary, was asked by F.E.S.G.’s Kiely if she would save the Elizabeth St. Garden. Nixon, who lives nearby, said that while green space is important, so is affordable housing.

“I live on Elizabeth St.,” Nixon said. “It is a beautiful garden. I love to go by it. I don’t have a position on it.” She added that the loss of green space is “a major change” that deserves careful review, “but it does have to be balanced with the need for affordable housing.”