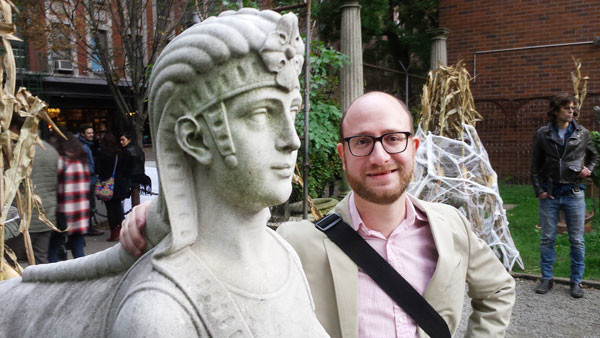 Paul Newell, with a pal in the Elizabeth St. Garden, helped push for a raft of County Committee reforms after Democrat bosses worked to block him from being the party’s nominee in a special election for state Senate in Lower Manhattan and Brooklyn last year. Photo by Scoopy

County comeuppance: A year ago, then-Assemblymember Brian Kavanagh was anointed by Democratic bosses, in what was derided as a “backroom deal,” to be the party’s nominee to fill the vacant Lower Manhattan/Brooklyn state Senate seat formerly held by Daniel Squadron. District Leader Paul Newell had the strongest support among County Committee members, but a regulations quirk for districts spanning two boroughs allowed the bosses to pick Kavanagh.